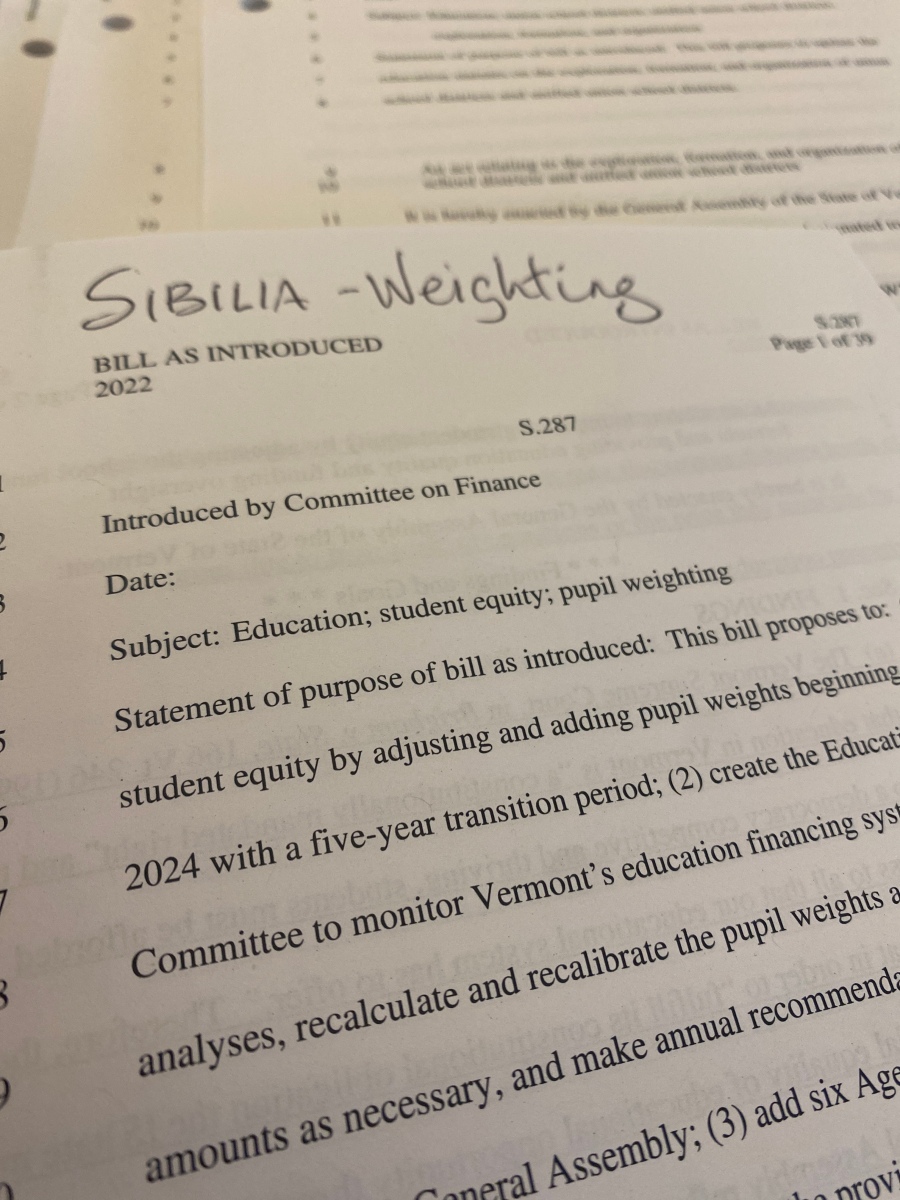 We have reached the point in the Vermont legislative session where all bills under consideration have passed out of the House and over to the Senate for consideration – and vice versa. If the bill is agreed to by the other body, then Governor Scott will weigh in on whether he not he supports the bill.

The Senate has approved maps to reapportion the Senate Districts and has attached that onto H.722 which is the bill that the House sent over with the proposed new House Districts. The Senate voted unanimously to approve all districts. In the House, the vote was 129-13. The districts meet the Constitutional requirements. I voted no when the bill left the House for reasons I have previously extensively detailed. I will vote no when the bill comes back to the House. I expect the bill to pass and become law. This means that in the elections for state representatives in 2022 Stamford, Readsboro and Searsburg will be in a new district with a portion of Pownal and Woodford. Dover and Wardsboro will be in a new and different district with Stratton and Jamaica.

On Friday the Senate FINALLY passed S.287 An act relating to improving student equity by adjusting the school funding formula and providing education quality and funding oversight. This bill includes a schedule for rolling in corrected student weights. There is work to do in the House on the timeline and a political advisory committee that were included in this bill, but the passage of S.287 is enormous and thanks go to Senators Becca Balint, Ruth Hardy and Brian Campion for moving this bill. Many thanks to the Town of Dover, Twin Valley School District and River Valleys School Districts which have been working with statewide coalitions to ensure passage this year.

At the same time that this bill to correct ongoing harm to our neediest students and communities was passing in the Senate, the Ways and Means and Education Committees were interrogated during debate on H.737, the annual Yield Bill, for failing to provide funding to transition in the corrected weights. Transition funding is extremely important for districts that, through no fault of their own, have been over accessing resources without penalty for 20 years. Without transition funding those districts are likely to see dramatic increases in their tax rates. In fact, the Way & Means Committee acknowledged that they have not yet calculated the amount of transition funding that will be needed. This is not a simple calculation, it requires time and collaboration with the Agency of Education and the Joint Fiscal Office modeling the effect of correcting pupil weighting.

During my interrogations of the Ways and Means Committee and House Education Committee, it became clear that one time election year property tax relief and mandating universal meals had been prioritized over ensuring all districts have equitable access to resources and sustained property tax relief.

Not only did the two House Committees fail to account for the needed transition funding, but they instead proposed using surplus in the education fund to pay for one year of what would be a new ongoing unfunded mandate for districts to provide universal meals at an ongoing cost upwards of 36 million dollars a year. Three new taxes on sugar sweetened beverages, candy, and cloud computing are under consideration. If the legislature passes a universal meals policy and fails to pass these taxes, the ongoing burden will be added to the property tax. If we also fail to correct student weighting, large wealthy districts will be supplied universal meals at the expense of rural and poor school districts.

Increasing future property taxes by mandating new ongoing spending ~ without correcting the pupil weighting financing mechanism ~ will further harm our neediest students and their taxpayers. That is unacceptable.

A large – and growing – coalition of lawmakers is pressing House Leadership and House Speaker Jill Krowinski to ensure we fix the funding mechanism – this year – before piling on additional tax burdens.

The committee I serve on in the House – House Energy and Technology – brought three major bills to the floor these past two weeks. Two are related to climate change adaptation and how we heat buildings and the third requires state government to define its current uses of artificial intelligence and establish a commission to ensure future use is non discriminatory and ethical.

Friday the House passed H.740 which is the FY 2023 Budget. This budget considered the Governor’s proposals and now will go to the Senate for consideration. Highlights from the House Budget of particular local interest include:

Additional funding bills that passed on Friday include the so called “T-Bill” which funds highways and transportation projects and the Capital Budget Bill which funds investments in state buildings.

The Rural Economic Development Working Group in the House (REDWnG) which I co-chair has been actively engaging on land use and Act 250 legislation that has been moving. We have been told that the House would take up Act 250 governance and the Senate would work on policy changes. The governor had previously insisted governance changes needed to be a part of any package passed. With time limited funding available through ARPA, it seems that requirement may no longer be a priority. This week REDWnG issued a statement about the current status of a number of bills after passage of H.492 the governance bill and then one of our caucus priority bills unexpectedly made a detour an failed to go to the floor for a vote.

Montpelier, VT – The tri-partisan House of Representatives Rural Economic Development Working Group (REDWnG), also known as the Rural Caucus, is calling for meaningful action on common-sense Act 250 reforms to make the law consistent, realistic, and reflective of the actual needs in the state of Vermont. The Rural Caucus call for substantive engagement follows extensive work throughout the past summer and fall of 2021 working with forest and farm businesses across the state to identify important changes to Act 250 governance that would help refine and clarify requirements, make them consistent across the state, and reflect the realities of working lands businesses.

“S. 234 and S. 236 incorporate some of the changes important to the caucus,” said Representative Charlie Kimbell, co-chair of REDWnG, “and the House Committee on Natural Resources is planning to take up those bills when they come over from the Senate.”

“Our 50 member caucus is ready to engage all parties – our colleagues in the legislature, regulators, advocates, the Administration – thoughtfully and productively on these issues that are critical to rural Vermont,’ added Representative Laura Sibilia, co-chair. “Rural Vermonters need more consistent governance and process in Act 250 decision making, and policymakers and regulators should work to solve known unintended consequences of Act 250 without tying more contentious issues to passage of those solutions .”

The caucus introduced the first-ever Rural Economic Development Omnibus Bill (H.581) this year, and the Act 250 changes proposed in H.581 were crafted to find broad support across party lines in the Statehouse by recognizing the priorities and realities of Vermonters who work the land and also building resilience in the face of global climate change.

While several components of H.581 have advanced the revisions to Act 250 sought by the caucus have a long way to go.

The common-sense Act 250 reforms the caucus is most focused on include:

Gun legislation was signed into law this week after objections from the governor were resolved. The bill begins to address the so-called “Charleston Loophole” a provision in federal law that gives gun sellers discretion on whether to make a sale if the FBI fails to determine within three business days whether a buyer is eligible to purchase a gun. This loophole was used by the shooter in a 2015 massacre at a historically Black church in Charleston, South Carolina, to buy a gun. An earlier proposal gave the FBI 30 days. I’ve heard from one of our local gun dealers state lawmakers to try to encourage federal legislators to fix the FBI NICS system. I voted to support S.4 along with a tri-partisan group of 90 other representatives.

The elements included in this legislation include:

S.265 is an act related to expanding criminal threatening to include threats to third persons has been introduced as repeated threats against state employees, election officials and school and heath officials have been on the rise. As You Tube and fringe organizations like QAnon promote unprovable fallacies and conspiracy theories and the former president continues his baseless claims about election fraud – some Vermonters have openly threatened those supervising elections, those providing healthcare during the pandemic, and those elected individuals governing schools.

I have received emails from some claiming this bill would take away the first amendment protections of individuals. The bill actually speaks to the crime of threatening someone’s freedom to live. The freedoms we have as a result of being Americans are not unlimited. If your words threaten the life of another, your freedom of speech has exceeded its limits by violating the rights of another. For instance, threatening to push someone you don’t agree with off a 100 foot bridge, or line them up against a wall and shoot them goes beyond protected speech. As is always the case, balance is key. Here is a recent VTDigger article about the bill: Senate advances criminal threatening bill in response to ‘ugly’ and ‘profane’ threats to state employees

News of Interest to the Windham/Bennington District

Stay in touch and keep track of the legislative session

See what bills I have sponsored and voting record, or watch my committee hearings or Listen to VPR House Live Audio  or Watch House Live Video .

As always, if you have suggestions, concerns or critiques please be in touch so we can schedule time to discuss. Please do not hesitate to contact me if you need assistance navigating government services at (802) 384-0233 or lsibilia@leg.state.vt.us. Follow my regular posts online at http://www.laurasibiliavt.com